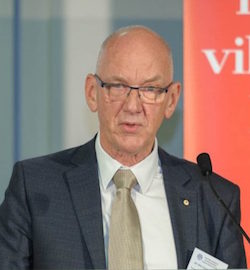 The Australian Institute of International Affairs (AIIA) announced that Allan Gyngell AO FAIIA will become the next national president of the AIIA.

Allan Gyngell is already a leader in the Australian international relations community. He is an honorary professor in the Australian National University’s College of Asia and the Pacific and author of the recently published acclaimed review of Australian foreign affairs, Fear of Abandonment: Australia in the World since 1942. Previous roles have included director-general of the Office of National Assessments, founding executive director of the Lowy Institute for International Policy, and senior advisor (International) to Prime Minister Paul Keating. He held diplomatic postings in Washington, Singapore and Rangoon.

Allan Gyngell will begin his presidency when the current president, Kim Beazley AC FAIIA, steps down from the role following the AIIA 2017 National Conference on 16 October.

Kim Beazley says Gyngell is without peer to lead the AIIA at this time.

“Allan Gyngell will provide invaluable insight and leadership for the AIIA at a time when its core mission—to promote understanding of international affairs—is becoming more important than ever. Gyngell’s own long association with the AIIA, which began with him first attending meetings as a high school student, becoming an AIIA Fellow in 2010 and now national president, is a demonstration of the significant influence and outreach of the organisation.

“I’m very pleased to welcome Allan to the new role and I’m sure that he will only enhance the unique contribution that the AIIA already makes to the discussion of international affairs in Australia.”