Professor Steve Robson and Dr Danielle McMullen have been elected as the new President and Vice President respectively of the Australian Medical Association (AMA). 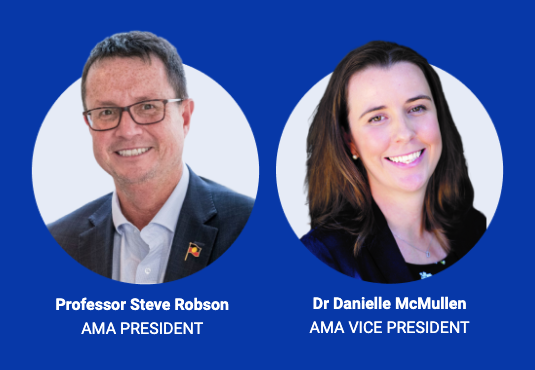 The election, at the AMA’s National Conference on 30 July 2022, follows the conclusion of the two-year terms of President Dr Omar Khorshid and Vice President Dr Chris Moy.

Professor Robson is a senior specialist in Obstetrics and Gynaecology and has been in practice in Canberra for 20 years.

Professor Robson first joined the AMA in 1984 as a medical student in Queensland. He has served as ACT President and is in his fifth term on the AMA ACT Board and is a Federal Councillor. He has also been President of the Royal Australian and New Zealand College of Obstetricians and Gynaecologists.

Dr McMullen is a GP in Sydney’s Inner West, and immediate past president of AMA (NSW), which included handling the state's response to COVID. Throughout the pandemic, she demonstrated strong leadership, effectively engaging decision makers to further the AMA’s strategic policy and public health aims.

Dr McMullen is passionate about the AMA and strongly believes it is the only organisation that successfully brings together doctors from all specialties and stages of career to advocate for a better system for patients and their doctors.

“Our new team will be a strong advocate for the medical profession and the community following in the large footsteps of the former leadership team of Dr Omar Khorshid and Dr Chris Moy.

“We have come so far, but there’s still so much to be done. I am determined to see general practice not only survive but be recognised as the lynchpin it is in our health system. It is one of the most cost-effective ways of keeping Australians healthy,” said Professor Robson.

“As a leadership team, we look forward to working with members and non-members and stakeholders, including government to see the $1 billion dollars in funding earmarked for general practice spent in a targeted and effective way as outlined in the 10 Year Primary Health Care Plan,” said Dr McMullen.

“Continuing the AMA campaign to stop the Hospital Logjam and restore sustainable funding to our public hospital system and hold the new federal government to account will be a priority also,” she said.

“Across the issues of prevention, private practice, public hospitals, aged care and general practice we are looking forward to continuing the critical work the AMA carries out, and highlighting that health is the best investment for governments to make,” said Professor Robson.