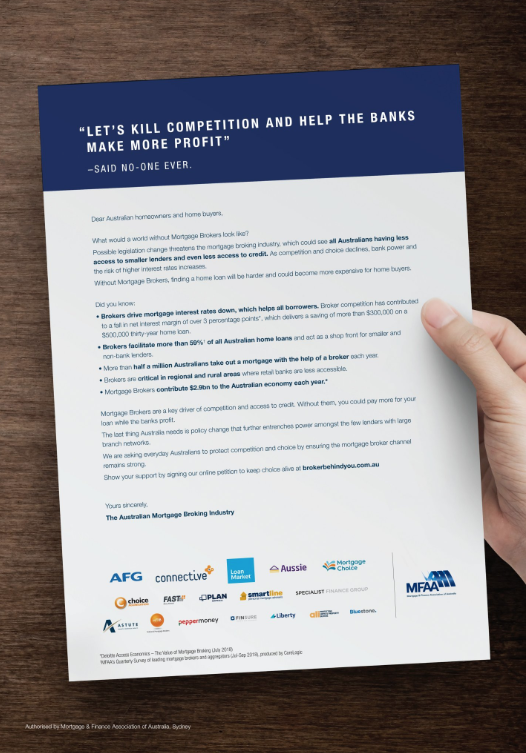 The Mortgage & Finance Association of Australia (MFAA) and a coalition of industry partners have launched a national campaign to remind Australians what a world without brokers would look like.

The industry faces potential policy changes that could make the mortgage broker channel unsustainable, drastically reducing competition, choice and access to credit in home lending, while delivering a windfall for major banks.

MFAA CEO Mike Felton said the imposition of a blanket ban on commissions (starting with the removal of trail from 2020) would significantly lower broker remuneration, have a devastating effect on the broking industry, kill competition and drive up the cost of borrowing for millions of Australians.

“Consumers can rightly feel disappointed at this outcome of the Royal Commission. The recommendations on brokers represent a massive win for the big banks,” Mr Felton said.

“The Royal Commission was set up to protect them from big bank power but has simply entrenched it further. How mortgage brokers can be front and centre of the recommendations is inexplicable to me. A massive new bank fee added to the cost of buying a home cannot be a good outcome for Australians.

“As reviews by ASIC, the ABA and the Productivity Commission have found, brokers drive competition by providing a shopfront for smaller lenders, particularly for rural and regional customers. We are critical to the health of Australia’s mortgage lending market,” Mr Felton said.

“Mortgage brokers now originate 59.1 percent† of all mortgages in Australia, and more than half a million home buyers use a broker each year. Much of the growth in our market share has come from small and regional lenders who can now compete nationally against the Big Four, which puts downward pressure on interest rates.

“We believe significant policy changes must hold competition, consumer choice and access to credit for marginalised groups as the highest priority, to protect outcomes for consumers.

I fail to see how decimating the broker channel, leaving Australians with a handful of lenders to choose from, is good for competition, or good for customers,” Mr Felton said.

As Treasury noted in its submission to the Royal Commission’s Interim Report, ‘if mortgage broking activity diminishes, this could have a significant detrimental impact on competition in the mortgage market. The potential beneficiaries of any lessening of competition would be the major banks with established branch networks’.

There can be no doubt that a flat fee for service would indeed significantly diminish mortgage broker activity.

According to Deloitte Access Economics, a broker earns on average $86,417 before tax.* Many brokers are small business owners, and any reduction of their income would immediately challenge the viability of their business.

The models proposed by the Royal Commission’s Final Report, (and supported by some large lenders) would result in customers deserting mortgage brokers and would force thousands of brokers to leave the industry.

“In the resulting low-competition environment, interest rates are likely to increase for all Australians, and access to credit for regional and rural borrowers, as well as those with complex financial situations could be severely impacted,” Mr Felton added.

“In short, without mortgage brokers, finding a home loan would be harder and more expensive for all Australians.”

Mortgage brokers help drive mortgage interest rates down. Broker-driven competition has contributed to a fall in net interest margins of more than three percentage points,* which delivers a saving of more than $300,000 on a $500,000 thirty-year home loan. In addition, brokers contribute $2.9 billion to the Australian economy each year, and represent 27,000 FTE jobs in Australia.*

“Brokers are critical to competition in home lending. As such, the MFAA is leading a campaign to call attention to this issue and help Australians understand that low interest rates, competition and the services they receive from brokers for just under six out of every ten new home loans are under threat,” Mr Felton said.

“We have launched a national advertising campaign this week, and we are calling on everyday Australians to join us in a grassroots campaign to protect competition by letting their local representatives know they support the broker channel.

“Consumers can visit our campaign website to register their support with their Federal MP. I urge all Australians to click the link below and show support for an industry that underpins and helps sustain our entire home lending market,” he added.

Consumers can visit www.brokerbehindyou.com.au  to enter their postcode and contact their Federal MP.