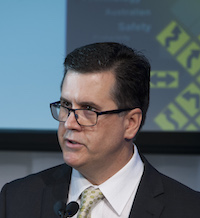 “It is with many great memories, fondness and pride that I announce my leaving HVIA,” Mr Wright said.

“I have been privileged, firstly to have been given the opportunity to work for The Commercial Vehicle Industry Association of Queensland (CVIAQ) all those years ago and then to continue to lead it over the last twenty years culminating in its transformation into a truly national industry body, HVIA, in 2015.”

Mr Wright commenced his career with, what was then, CVIAQ in 1996 and took over the role of Chief Executive Officer shortly after.

During his tenure, the organisation has been instrumental in advocating for the heavy vehicle industry on many major issues and most notably through the transition to Heavy Vehicle National Law under the auspices of the National Heavy Vehicle Regulator.

“Brett has steered the organisation through a period of enormous transformation,” Mr Langworthy said.

“When the time came, members were unanimous in determining that the way forward had to be as a national body, and not for a moment did we underestimate the size of the undertaking that would follow.

“Brett has led that project over the last three years, and put together an extremely capable team to build the capacity of the organisation across the country.

“I know I speak on behalf of all Board Directors, past and present, when I congratulate Brett on his exemplary and unselfish leadership.”

Mr Langworthy said that HVIA is on track to deliver its strategic vision.

“We are looking forward to achieving the next stage in that journey. There are a number of key objectives that we have undertaken both in our business plan and in HVIA’s forward strategy.

“HVIA will only be a success if we continue to listen to our valued members, bring the industry together and effectively represent them to government and other oversight bodies.

“The time is right for the industry to collaborate on increasing productivity and ensuring our innovation and manufacturing footprint grows to its full potential.”

The HVIA Board has commenced a search and selection process to seek a suitable successor to Mr Wright who will stay in his role until his replacement is ready to take over.

“I am determined that I leave HVIA positioned as strong as ever and fully committed to ensuring the handover and transition to the new CEO is as smooth as possible,” Mr Wright said.

“Once that has occurred I look forward to enjoying some quality time with my family and considering new challenges and opportunities in my professional future.”