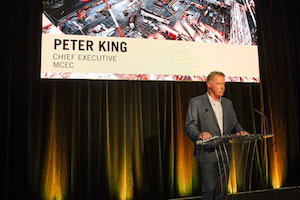 Melbourne Convention and Exhibition Centre (MCEC) has announced the design details of its A$300 million expansion project.

Primarily funded by the Victorian Government, the expansion aims to further develop MCEC as a premier events venue, as well as enhancing the current facilities.

At a preview event in October, CEO Peter King revealed the future MCEC will include the 1,000-seat Goldfields Theatre, which can be seamlessly transformed into a banquet dining space or a 9,000m2 pillarless exhibition space.

King also unveiled the Sovereign Room, a new smaller scale gala space, and the Courtyard, to accommodate more outdoor events. In addition to this, the project will include a new Goldfields Café and Bar, informal networking spaces, business centre and private board room.

MCEC expects the expansion will attract 74,000 international visitors to Melbourne each year and generate $167 million for the local economy.

This expectation remains largely unknowable for now, but the expansion does guarantee much needed extra space, space which allows MCEC to take on the growing number of large-scale events being held in Melbourne.

“To date, we have secured or are in the process of contracting over $15 million of revenue in the new space, which will be ready to house events from July 2018,” Mr King confirmed in February of this year.

Melbourne Home to Largest Chemical Congress Ever Hosted in Australia

AMA Secretary General to move on after contract ends in 2018