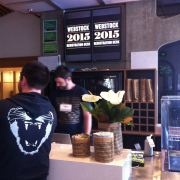 Over 850 web designers, developers and industry leaders from across America, Canada, UK, Australia and New Zealand descended on the Michael Fowler Centre and St James Theatre in Wellington on 16th February 2015 for the annual Webstock Conference. Both venues are part of Positively Wellington Venues.

The four-day event is the result of Natasha Lampard, Mike Brown, Deb Sidelinger and Ben Lampard’s desire to create a conference that inspires and educates all those working in the digital sphere and originally attracted 500 delegates.

Glenys Coughlan, Chief Executive at Positively Wellington Venues said the conference brought a buzz to the city and praised the choice of St James Theatre.

“The theatre provides a great juxtaposition between the building’s history and heritage and the cutting edge ideas shared on stage,” she said. “Events like this are a great opportunity to showcase what makes Wellington so competitive as a destination in the Australasian conventions market.”

Natasha Lampard from Webstock said that the range of international speakers in New Zealand from America, Australia, Canada, UK and New Zealand for Webstock ‘15 have either worked or are working at organisations like Facebook, Twitter, Intel, Uber, Obama for America and the Brooklyn Museum (NY).

“It gives delegates the opportunity to meet and talk with the best in the business, the ones who are shaping the future in the digital space. We have enlisted the expertise of an eclectic range of experts form web designers and film,” Ms Lampard said.